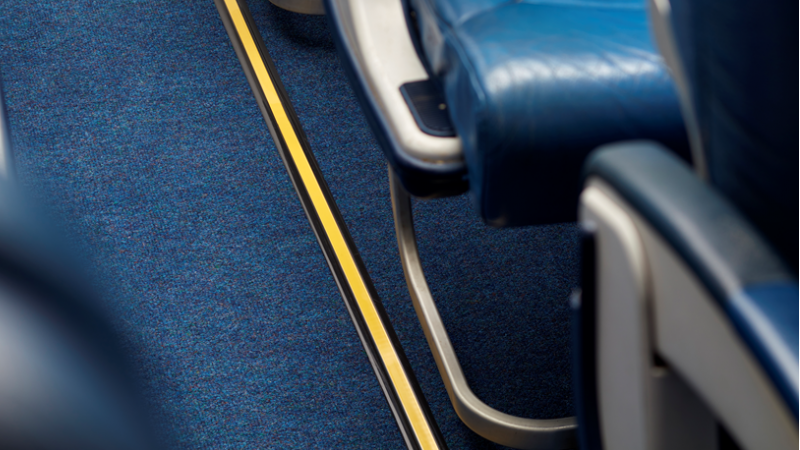 This latest contract win builds on the company’s outstanding performance and service delivery as a Tier 1 Boeing supplier, having this year been awarded their eighth consecutive supplier award for superior performance. STG Aerospace has been supplying the photoluminescent floor path marking system to Boeing for the Next-Generation 737 for more than 16 years.

As a line fit option on the 787 Dreamliner fleet, saf-Tglo® SSUL is fully certified by EASA and FAA for virtually every Boeing, Airbus and Embraer airplane model and enables the operators of multiple aircraft type fleets to have a common supplier for its emergency egress marking system. The lightest and most discrete Emergency Escape Path Marking System available, SSUL is also 17% brighter and 70% lighter than the previous SSL system, helping to reduce airline fuel costs.

SSUL’s reduced profile also makes it an optimal match for modern lightweight carpets and with over 300 colour options, and unique blue-glowing and carpet PatternMatch™ options available, airlines are able to co-ordinate the system with their cabin colour scheme and corporate branding without reducing safety.

First introduced in 1995, saf-Tglo® is installed on more than 11,000 aircraft worldwide and is the system of choice for virtually every major aircraft manufacturer and more than 300 airlines worldwide. Needing no power source, the system is 100% reliable, maintenance free and has no life limit thereby eliminating the operational delays and costs associated with electrical systems. Reduced maintenance costs of up to 80% are achieved through a durable material structure.

“We’re thrilled our longstanding relationship with Boeing continues to evolve.  This new contract to supply the production line for the 787 Dreamliner is another significant OEM contract win for us in recent months, and another major OEM contract in recent months. As one of Boeing’s worldwide suppliers, an achievement the entire company takes huge pride in, we’re delighted our quality performance and customer service continues to expand our key customer relationships.”

STG Aerospace has been a supplier to Boeing since 2000 and over the years has won a number of supplier awards in recognition of its high performance aircraft cabin lighting technologies. This year, STG Aerospace has won its eighth consecutive Boeing Performance Excellence Award.