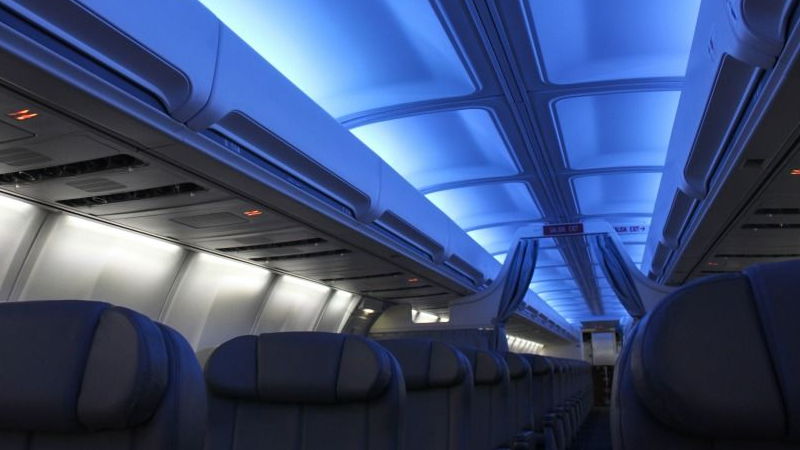 With the first retrofitted aircraft installed during a cabin re-configuration earlier this week and already in commercial service, its sister aircraft will be modified later this summer. This adds to the increasing number of airlines across Europe, North and South America that have selected liTeMood® -  making it the undisputed system of choice for operators of narrow-body Boeing fleets looking for a best in class but cost-effective solution for upgrading dated cabin lighting.

liTeMood® represents the next generation in simple, beautiful and easy-to-install retrofit LED mood-lighting aimed at significantly improving passenger comfort and reducing maintenance costs.  The blue/white bi-colour system creates a calming and fresh cabin ambience by delivering outstanding quality and consistency of light throughout the cabin.

Whilst “Plug and Play” can be an abused term in the world of aircraft modifications, liTeMood® is a genuine example of a truly simple upgrade requiring no aircraft modifications, using all the existing wiring, mounting points, connectors and control panel.  The system is typically installed in under five hours, independent of and with minimal impact to any other cabin work making it straightforward to accomplish during a short stop.

Alastair Willson, Director of Titan Airways said: “At Titan Airways we are always striving to improve the in-flight experience and the investment in mood lighting is one more enhancement of the Titan Airways product. We selected STG Aerospace’s liTeMood® system due to their huge experience and expertise in upgrading Boeing 737 and 757 aircraft with LED cabin lighting.  The simplicity and speed of installation was exactly as described and the transformation of the cabin was breath-taking.  The latest investment follows installation of a state-of-the-art wireless in-flight entertainment system across Titan’s Boeing 757 and Airbus A320 fleets last year”.

Nigel Duncan, CEO of STG Aerospace, commented: “We are delighted that Titan Airways, one of the most prestigious charter airlines in the world, has selected liTeMood® for its Boeing 757 fleet.  The installation, carried out at short notice the weekend ahead of a VIP charter operation, was an excellent partnership between STG and Titan engineering teams and is further evidence that liTeMood® has become the clear choice for operators of Boeing narrow-body aircraft”.