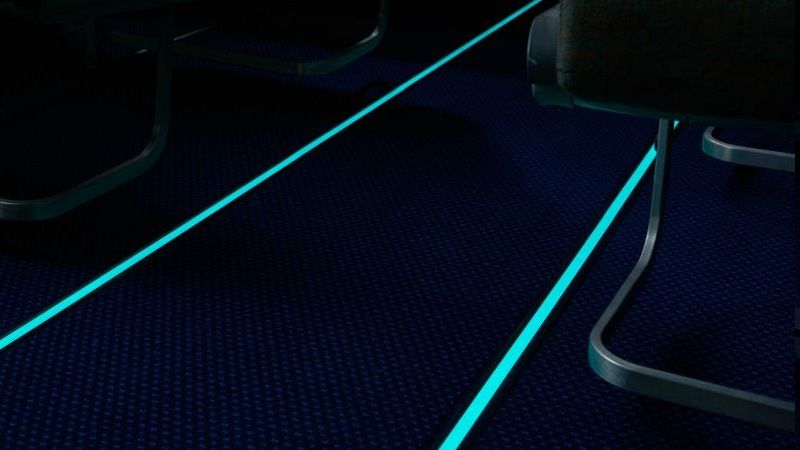 This is the first time that an emergency egress system using blue photoluminescence has been approved for use in any aircraft application. saf-Tglo® blu provides a unique colour glow for operators of aircraft in the Airbus family and cabin designers alike preparing to modify or upgrade Airbus aircraft interiors.

Engineered from the proven technology of the original and market-leading saf-Tglo®photoluminescent range, the unique and patented design of saf-Tglo® blu emits a blue glow, a noticeable change from the traditional green glow that has always been associated with the product, and enables airlines to subtly transform cabin aesthetics via simple illumination without compromising passenger safety.

In daylight, the body colour of saf-Tglo® blu is whiter than the glow produced by traditional photoluminescent systems meaning that when it is used with any translucent film or overlay, the result is a truer, brighter, cleaner colour. In darkness, the glow has a calmer, softer, more reassuring quality whilst still performing the critical safety function the system provides.

saf-Tglo® blu is an obvious choice for operators of Airbus aircraft looking to improve their interiors appeal, the unique transformation afforded by the simplistic modification of a saf-Tglo® blu installation has the distinct ability to transform any aircraft, blending seamlessly with the latest mood lighting systems. Whilst obviously a significant visual upgrade, the origins of the design are actually based in science, and specifically the results of a human perception analysis which show that the blue wavelengths of emitted light enable enhanced passenger perception of the emergency track with a dark adapted human eye.

saf-Tglo® is the world’s lightest, narrowest and most discreet floor path marking system and the first non-electrical system that can reduce maintenance and operational costs. Installed on over 10,000 aircraft worldwide and selected by virtually every major aircraft manufacturer it is the photoluminescent floor path marking system of choice for aircraft manufacturers, airlines and cabin designers.

The EASA approval process was executed using STG Aerospace’s own in-house Design Organisation Approval (DOA) procedures and, using its extensive in-service performance data, the company has been able to reduce the maintenance burden for airlines by minimising the requirement for inspections. As with other versions of saf-Tglo®, saf-Tglo® blu can be very easily installed – typically by an airline’s own technical staff during an overnight shift.

Sean O’Kell, Director of Innovation for STG Aerospace, commented: “Securing EASA approval for saf-Tglo® blu across the Airbus fleet obviously opens up exciting new marketing opportunities for us and we’re already in advanced negotiations with key launch customers. As a product, it symbolises our commitment to the continual evolution of the saf-Tglo® range – always enhancing the aesthetics without in any way compromising on safety.”