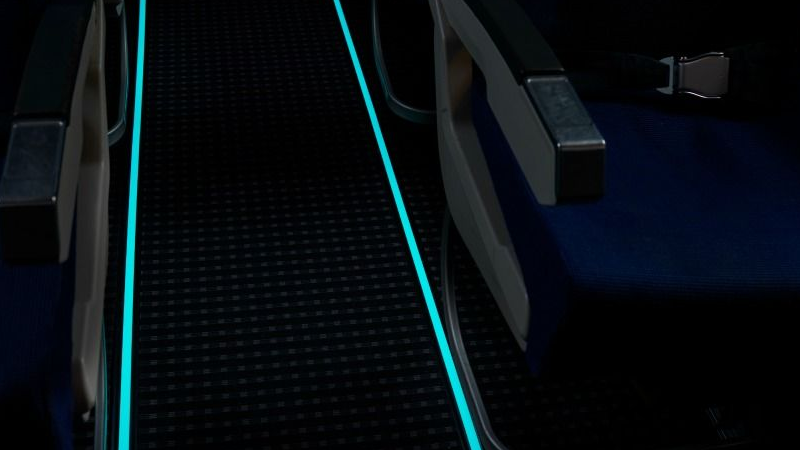 Recently awarded the prestigious title of ‘Best Cabin Innovation of 2016’ by APEX (Airline Passenger Experience Association) it will soon to be added to the options catalogue for major OEM programmes, this approval allows airlines following FAA regulations to install the system.

saf-Tglo® blu will transform how airlines accomplish emergency way guidance, for the first time enabling this critical safety system to complement the aircraft cabin aesthetics. With the same choice of base colours to match the carpet and interior colour scheme as the original saf-Tglo® range, saf-Tglo® blu introduces a soothing blue glow in place of the traditional green glow.  This works with an airline’s branding and the latest LED lighting installed in modern aircraft.

saf-Tglo® blu is based on the proven technology of the original and market-leading saf-Tglo® photoluminescent range and is available in the company’s SuperSeal UltraLite® (SSUL) system, which is the lightest, narrowest and highest performing photoluminescent system available. The simplicity of its design, its 100% reliability and being maintenance free with no life limit ensures that airlines can make significant operational savings too.

Dr Sean O’Kell, Director of Innovation at STG Aerospace, commented: “saf-Tglo® blu is the first blue glowing photoluminescent system to have ever been approved for any aircraft application. Following the EASA approval last year, we’re delighted we now have FAA certification for the leading aircraft types and we are already seeing significant interest in the product from both OEMs and airlines across the globe.”

STG Aerospace will be showcasing saf-Tglo® blu on its stand 6A28 at the Aircraft Interiors Expo in Hamburg on 4th – 6th April 2017.