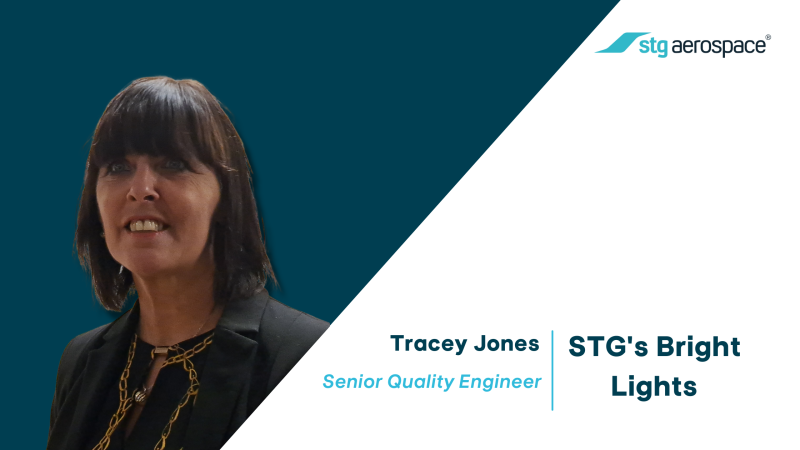 In our Bright Lights series, we’re showcasing some of our brilliant employees and their experience of working here at STG Aerospace.We sat down with Senior Quality Engineer Tracey Jones to find out what she loves about working at STG, how big of an impact her work has and why she thinks it’s important for more women to be involved in engineering.

When you look back on a career, you start to notice the turning points that lead you to where you are today. That experience was no different for Tracey Jones, whose engineering career started in the telecoms market, where she was extracting precious metals from used electronic devices. Fast forward to today and she is a key member of our quality assurance team, charged with ensuring our products are safe and ready for take-off. It’s been quite a journey.

With success in the telecoms industry came a couple of promotions, to the role of quality technician – her interest was piqued, and her expertise unlocked. Soon after, the Institute of Quality Assurance announced they would be launching a degree in Quality Assurance (QA) and Tracey knew it was something she had to pursue.

“I became the first woman in South Wales to earn that degree, which attracted the attention of Quality World Magazine,” she recalled. “That helped with my progression a lot and took me in to supplier management within electronics, before the industry started to leave the region, and the country.

“A small solar energy company were looking for a production manager with experience in quality management, so I then moved into that industry and that brought a lot of new and exciting things to learn. By the end of my time there I had been involved in creating the very first flexible solar panel made from foam and plastic, which ended up featuring on Grand Designs!”

Seeing Kevin McCloud talk about your invention on Channel 4 is something very few people can lay claim to, but Tracey is one of them. So, after magazine interviews and national television coverage, what made Tracey’s career take another exciting turn, this time into aerospace?

“I don’t know enough,” she said. “I’m a sponge, I always want to learn and although I had done a lot of QA work, I knew there was more I could learn. That’s when I was approached to join STG, and it was scary at first, because I knew how heavily regulated the aerospace industry is.

“I sat down with Grant (Bennett, CEO of STG Aerospace) and I was honest with him. I said I’ve never done aviation; I’ve never dealt with these certification bodies, and I know how critical it is. He explained it in the shortest and simplest way possible, saying it’s just ISO with bells and whistles.

“That’s the best way he could’ve set it out. It calmed me down and I accepted the job, knowing I could learn what I needed to learn. Four-and-a-half years later, and here I am. I started in precious metals, and now I’m working in aerospace.”

Tracey has worked her way up to being a leading figure and is now a signatory for the UK’s Civil Aviation Authority (CAA), meaning that among her day-to-day duties at STG – from arranging supplier visits and handling customer complaints to generating inspection reports and conducting quality audits – she is often working with documentation to release aircraft parts on behalf of the CAA.

It's a career that has, so far, produced plenty to look back on. Recounting her major achievements at STG over the past four-and-a-half years, the list is long – but there is a standout.

“Last year we had to get our Miami site ISO 9001 accredited. That’s challenging enough, but we had to do it remotely amid Covid restrictions, which added another layer of difficulty to it. Systems had to be set up, quality manuals had to be written, all without being on the ground in Miami and working across time zones.

“When we were ready for the visit of the certification body, the auditor ran through everything and told us he couldn’t find a single observation. That is extremely rare. A year later in the first of three post-certification audits, we were told again that there were no observations. It feels like a huge achievement, and it shows that we have a really good system in place.”

New challenges present themselves to Tracey everyday at STG. She explains how no two days are the same and how she interacts with just about everyone in the business on a daily basis. That’s why she’d recommend any QA professionals to work in aerospace: “Don’t let it scare you, everything you know is transferable. If you’ve got a passion for QA, then it’s an open-door policy at STG.”

But there’s a final challenge that Tracey wants to play her part in. The number of female engineers has improved over the past decade, but growth has not been fast enough – 16.5% of UK engineers are women, compared to 10.5 per cent in 2010.

“There’s still a stigma that engineering is a male profession,” she explains. “I don’t necessarily think that stigma exists within the industry quite so much anymore, but it still exists in schools and in colleges, which stops girls and young women pursuing a career in it early on.

“Maybe we need to turn the clock back a bit and do things the way we used to do them. Industries that need talent should get back into schools, go and visit local colleges, and speak directly to students about what these careers entail. That’s the only way of really getting through,, to open their eyes and show  that anyone can be an engineer, that female engineers are here and working in the industry.

“There were a lot of restrictions during the pandemic that obviously would’ve made that difficult, but there’s no reason why industries in need of new talent shouldn’t be getting back out there now and engagie with the engineers of tomorrow.”